More Than Just Nostalgia: The Comeback of Omega’s Column-Wheel Calibre 321

The Omega Speedmaster is already an icon, but the addition of the Calibre 321 takes it over the top. When Omega announced that they would resume production of the caliber used in the very first Speedmaster, the watch world held their breath. Vintage watches with this historical caliber are among the most sought-after models and fetch the highest prices.

The time is nearly here, and Omega isn’t skimping on prestige or emotional appeal. As if the historical caliber weren’t enough, they’re pulling out all the stops with a platinum case, a ceramic bezel with enamel numerals, and subdials made of meteorite from the Moon. It should come as no surprise that the model selected for this premiere isn’t going to be cheap; Omega announced in advance that the calibers would have a limited production run. For the time being, these timepieces will require a daunting investment of 55,000 CHF. However, with any luck, we may also see a steel version of the Speedmaster with the legendary Calibre 321 in the coming years. If this is the case, then you really don’t need a crystal ball to predict that the demand will be enormous.

But what makes this caliber so attractive to enthusiasts? Here a hint: It’s not just because it was in the original Speedmaster or because it was worn on the Moon. There’s one inconspicuous little component of the caliber that plays a big role in answering this question: the column wheel.

The Column Wheel: Marker of a Fine Chronograph?

Watch enthusiasts’ ear perk up at the mention of a  “column-wheel chronograph.” It’s no wonder, considering the “big three” brands of haute horlogerie (Audemars Piguet, Patek Philippe, and Vacheron Constantin) all craft chronographs with column-wheel calibers. Perhaps the most prestigious German brand, A. Lange & Söhne, also utilizes the column wheel (also known as a “pillar wheel” or “Swiss castle”) as standard in all of their stopwatch models. Those that use this technology make no secret of it. Rarely do journalists pass up a chance to praise the column wheel in their reviews. Column-wheel chronographs are steeped in an aura of tradition. There’s the impression that they are not only a technical masterpiece but also serve as a symbol of quality that elevates a timepiece to a whole different level. 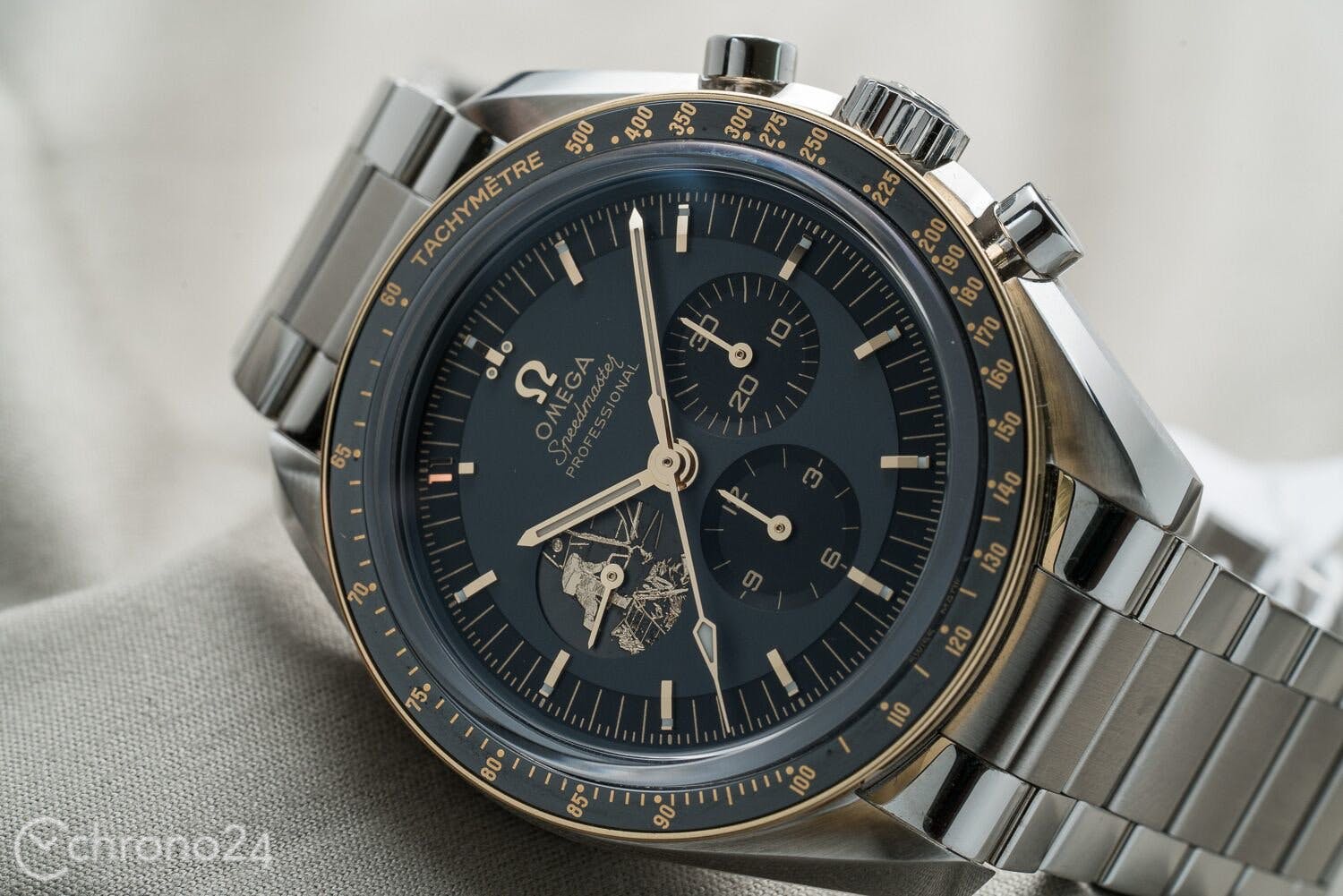 And what about the current Speedmaster versions? In fact, all of the current models use calibers without column-wheels – except for the Co-Axial models. However, purists consider these models new interpretations rather than the classic Speedy. With the return of the column-wheel caliber 321 to (albeit limited) series production, that’s going to change drastically. But does it make the previous Speedmasters less desirable? 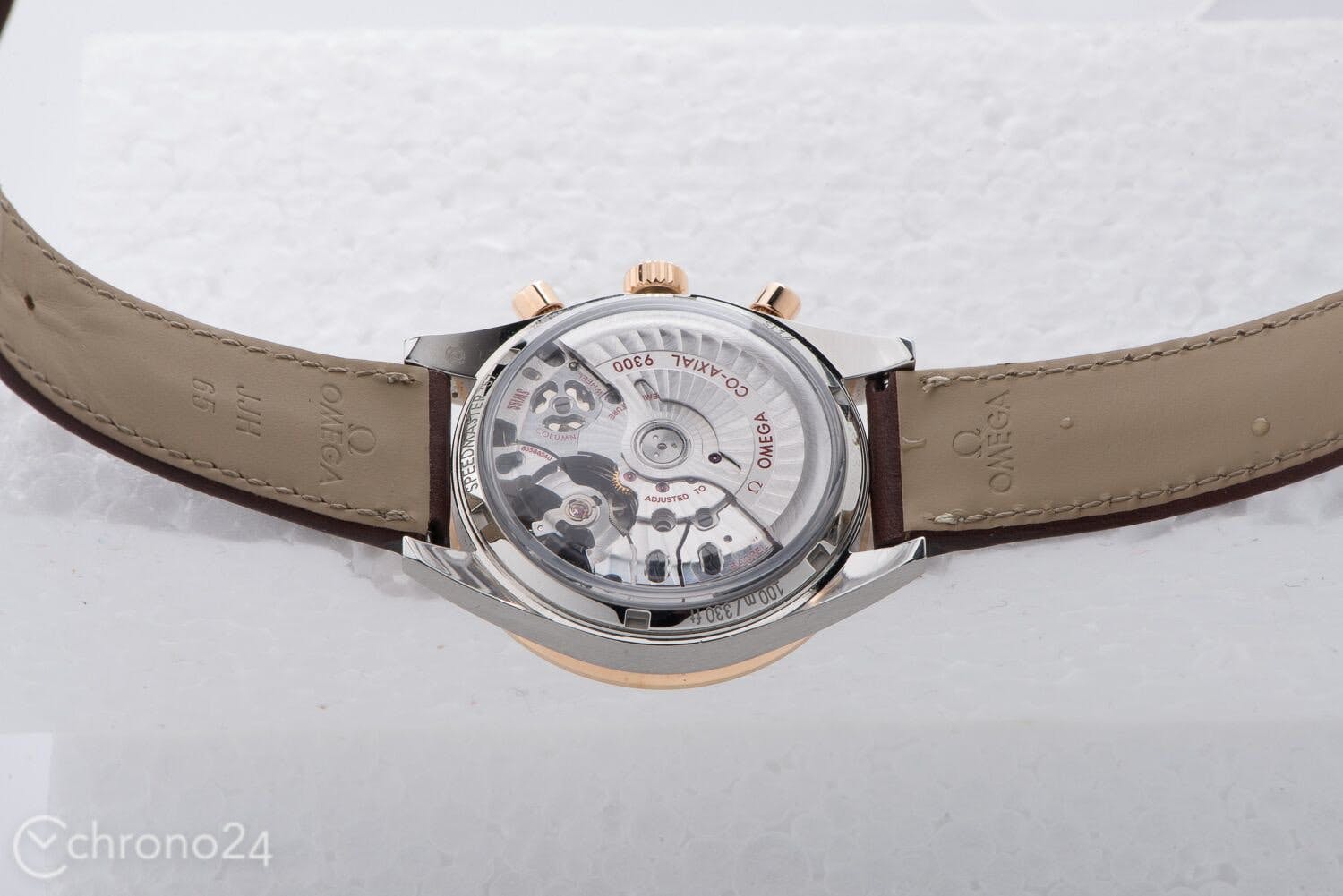 The modern caliber 9300 does have a column wheel, but it no longer has anything in common with the historical 321.Image: Bert Buijsrogge

Why is the column wheel so highly praised? Before we can answer that central question, we should first take a step back and ask: What is this mysterious column wheel, and why is it found in some chronographs and not in others?

It’s worth searching for these answers. The journey takes us from the early years of the wristwatch, past the omnipresent quartz crisis, and up to the rekindled passion for these wearable mechanical miracles. The search not only guides us to the answers but also tells us about what constitutes a passion and fascination for watches. 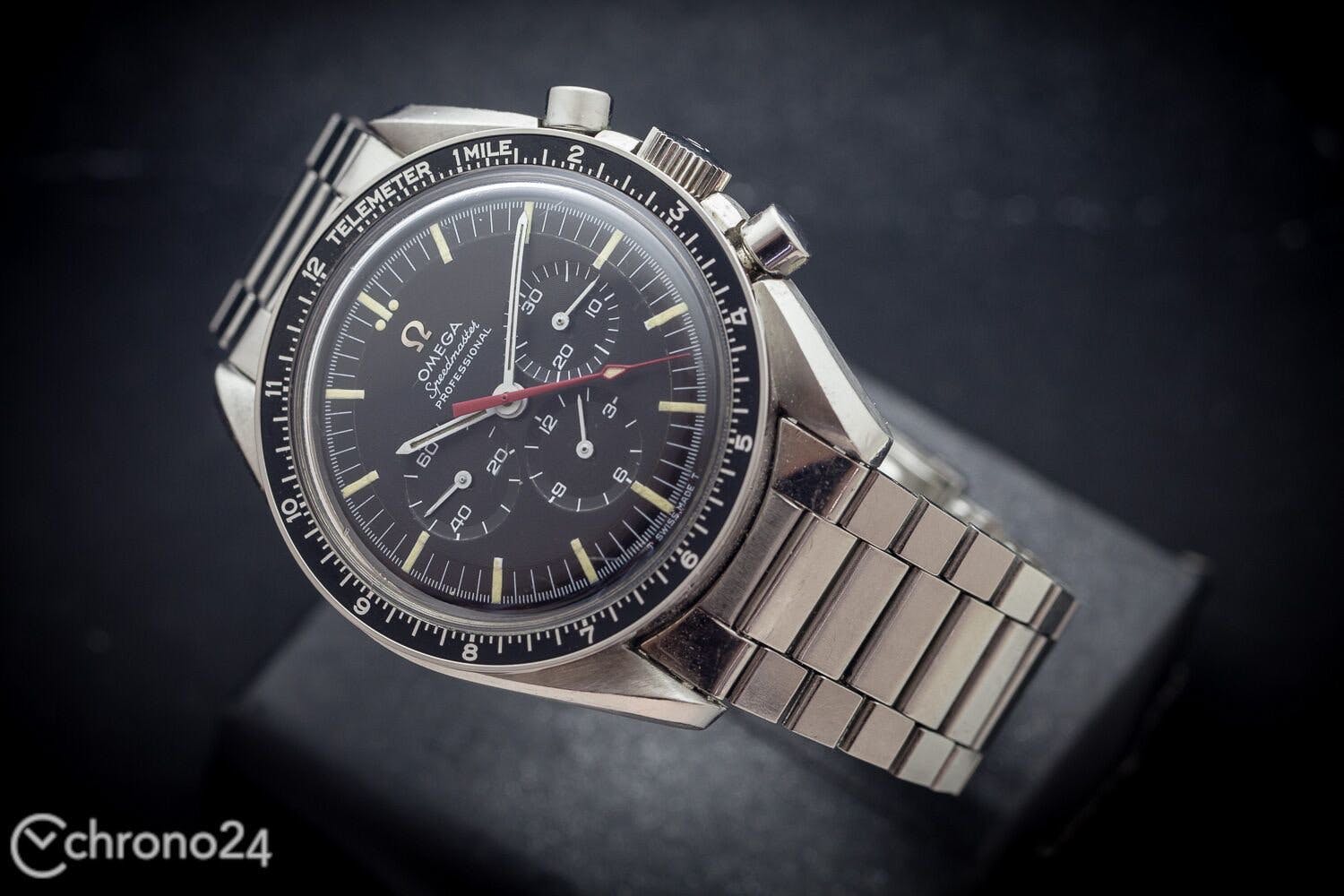 Longines presented the first chronograph for the wrist was presented in 1913. They equipped this timepiece with the caliber 13.33Z. This caliber features the typical arrangement for historical chronograph calibers: a column wheel, horizontal coupling (easy to recognize by the fine-toothed central chronograph wheel), and a screw balance. Its monopusher construction operates the start, stop, and reset functions via just one push-piece, which is integrated into the crown.

This is where the column wheel comes into play: When the pusher is activated, the column wheel rotates by a predetermined angle and the toothed ratchet wheel on its underside is held in the new position by a click and spring. The six raised columns on the top also rotate. If you look around the column wheel on the caliber, you’ll see some intricately formed spring-loaded levers, which converge on the ratchet wheel at their three ends. 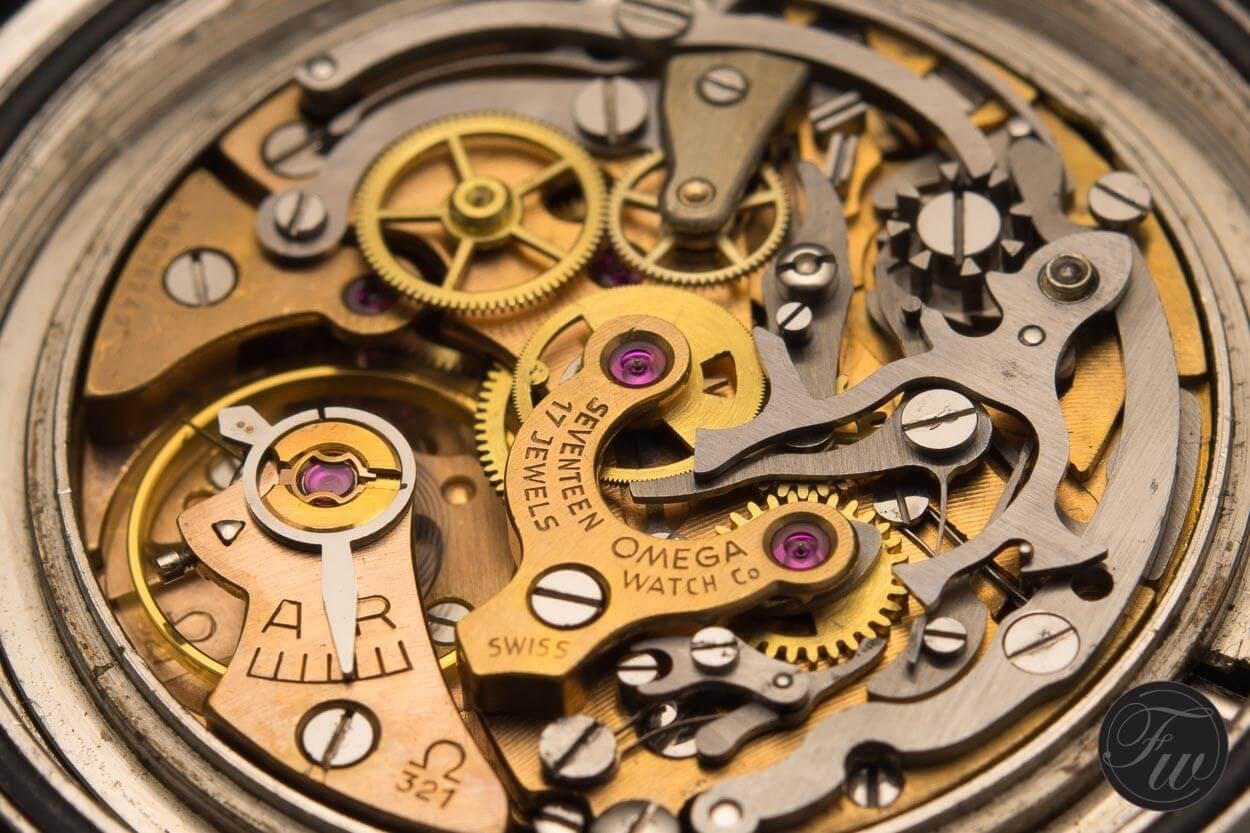 The column wheel is easy to spot at the top right. The lever with the two flat ends is the reset lever. Underneath that you can see the brake lever, which locks the central wheel on decoupled chronographs. The wheel at 12 o’clock couples the fine-toothed central wheel with the caliber via a third lever.

Three levers, three functions: start, stop, reset. Every turn of the column wheel, which is initiated by the pusher, changes the position of the levers based on whether their end stops on one of the columns or between two neighboring columns. This interplay between the columns and levers is, thus, a “preprogrammed” sequence. It’s an elegant, aesthetically pleasing, and functional solution that remained the industry standard until the 1930s.

Are two push-pieces better than one?

The second pusher at 4 o’clock was introduced by Breitling in 1934 and defines what we think of as a chronograph to this day. In the version with two pushers, the column wheel only has two levers. The top pusher still controls the stop and start functions, while the lever responsible for resetting the chronograph is connected to the second pusher.

Today, monopusher chronographs are usually found on exclusive models that are based on a brand’s vintage watches. Manufacturers market them as especially exquisite. However, from a historical perspective, they represent the precursor to the chronograph with two push-pieces and are, therefore, clearly functionally inferior. Nostalgia seems to play a larger role here than technical details. Could the same thing be happening with the column wheel in general?

As a modern watch enthusiast, it’s easy to forget that, up until relatively recently, the mechanical watch was more than a fashionable object for collectors. Rather, people from all walks of life were dependent on affordable, functional watches. So, while historical chronograph movements are elegant and aesthetically pleasing from the modern collector’s perspective, they were rather unfit for mass production. The column wheel was one of the main reasons for this. It’s a three-dimensional component with multiple levels and functional surfaces, which are difficult to deburr due to their geometry.

With the goal of making chronographs easier and cheaper to produce, the manufacturer Landeron presented the caliber 47 in 1937. This caliber’s chronograph components came from Dubois-Dépraz, who are still known for their complication and chronograph modules. The caliber 47 was the first to replace the column wheel with two-dimensional components called cams. Their complex contours allow them to perform the chronograph functions. The advantage: As opposed to the column wheel, they can be punched out of a metal sheet and are much easier to produce.

This type of construction has been so successful that the most commonly encountered type of chronograph caliber still in production today is the Valjoux 7750 and variations thereof. These movements all feature a cam switching unit instead of a column wheel. 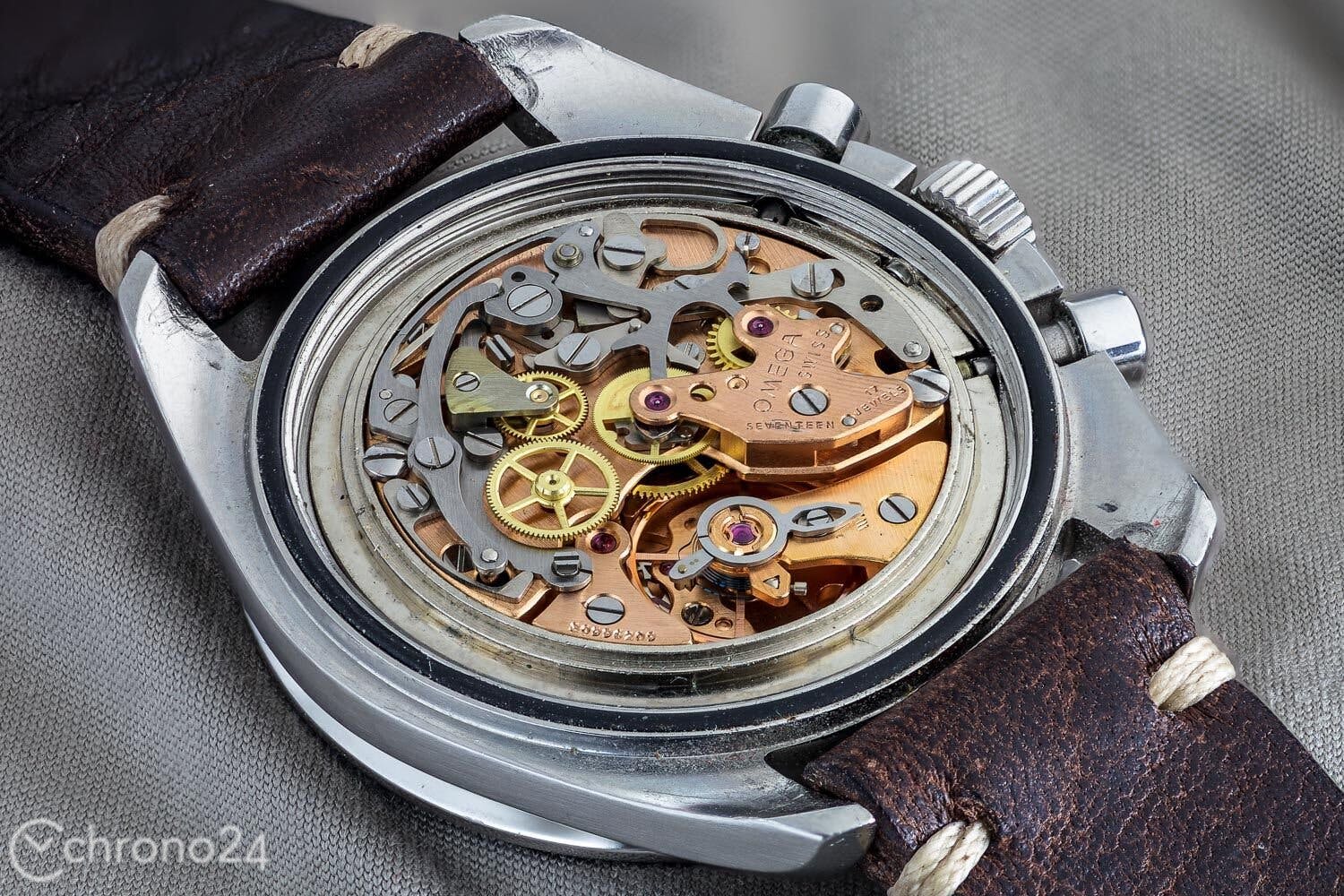 The caliber 861 took over for the caliber 321, replacing the column wheel with a more easily constructed cam-operated caliber.Image: Bert Buijsrogge

The famous Omega Speedmaster originally appeared with the Lemania 2310 – known at Omega as the “Calibre 321” – with a column wheel. The introduction of the caliber 861 saw the switch to a cam-operated caliber, which can still be found in the current Speedmaster caliber 1861.

A Return to Traditional Values

After the quartz crisis, it was evident that the best way forward would be to portray high-quality mechanical watches as collector’s items and status symbols. This reshuffled the deck for the future of the watch industry. All of a sudden, the main goal was no longer to design with practical mass production in mind or to have a leg up on electronic watches from Asia. Instead, the recipe for success was to credibly impart a brand’s history and artisanal methods in each timepiece. Customers wanted more than reliable watches; above all, they craved emotionally valuable luxury goods – and that’s when it became fashionable to quote historical technologies.

Instead of keeping designs as neutral and functional as possible, new mechanical calibers from the years after the quartz crisis are decidedly opulent. That’s why the column wheel, with its desirable look and historical roots, can no longer be excluded from modern chronograph calibers. A prime example of this is the Lange L951.1 from the first Datograph. Elegantly curved levers, gold chatons, hand engravings, and mirror-polished edges elicit emotions from times gone by. Purely functional chronographs with unfinished, punched-out parts pale in comparison. 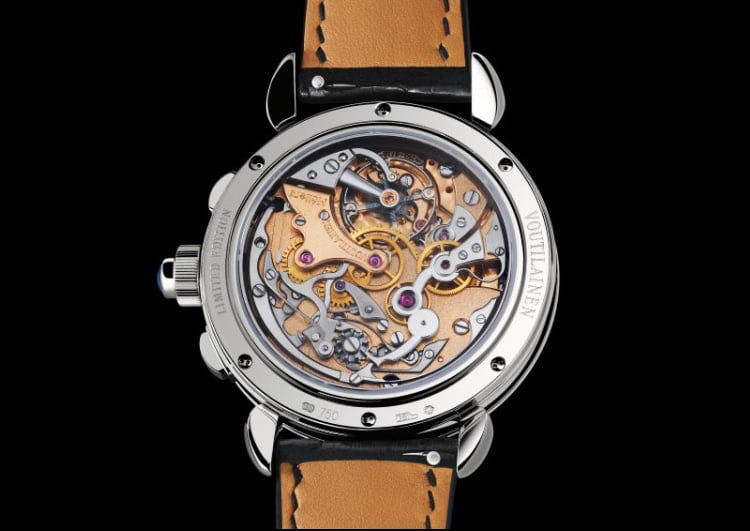 Chronographs Without a Column Wheel: Are They Really Less Valuable?

The Doppel-Felix from the small but competitive Austrian brand Habring2 proves that modern constructions with cam-operated calibers can hold their own. At the 2018 edition of what is perhaps the industry’s most prestigious awards ceremony, the Grand Prix d’Horlogerie de Genève, this watch won the “Petite Aiguille” prize.

Although watches in the haute horlogerie sector rarely house calibers without column wheels, one should keep in mind that this is not due to their inferiority. Calibers like the Valjoux 7750 (cam-actuated) have proven themselves time and again, and with good reason: They are considered robust and reliable. On the other hand, column-wheel chronographs are not necessarily reserved only for exclusive timepieces. For example, the Column-Wheel Chronograph from Longines is available for around $2,000 in new condition.

My Takeaway: The Secret of the Column Wheel

Although cam-operated calibers were designed with only the best intentions, their background of affordable practicality doesn’t really fit with today’s conception of watches as valuable treasures. We now know what a column wheel is, what it is used for, and why it was then rejected, only to celebrate a renaissance in modern times: It has nothing to do with practical, economic, or technical considerations. It’s about something much less tangible: tradition, history, aesthetics, and the value ascribed to these attributes. However, when you disregard the “nostalgia factor,” neither option is inferior, per se. So there’s no need to worry: Both column-wheel and cam-operated calibers are worth having – for completely different reasons. 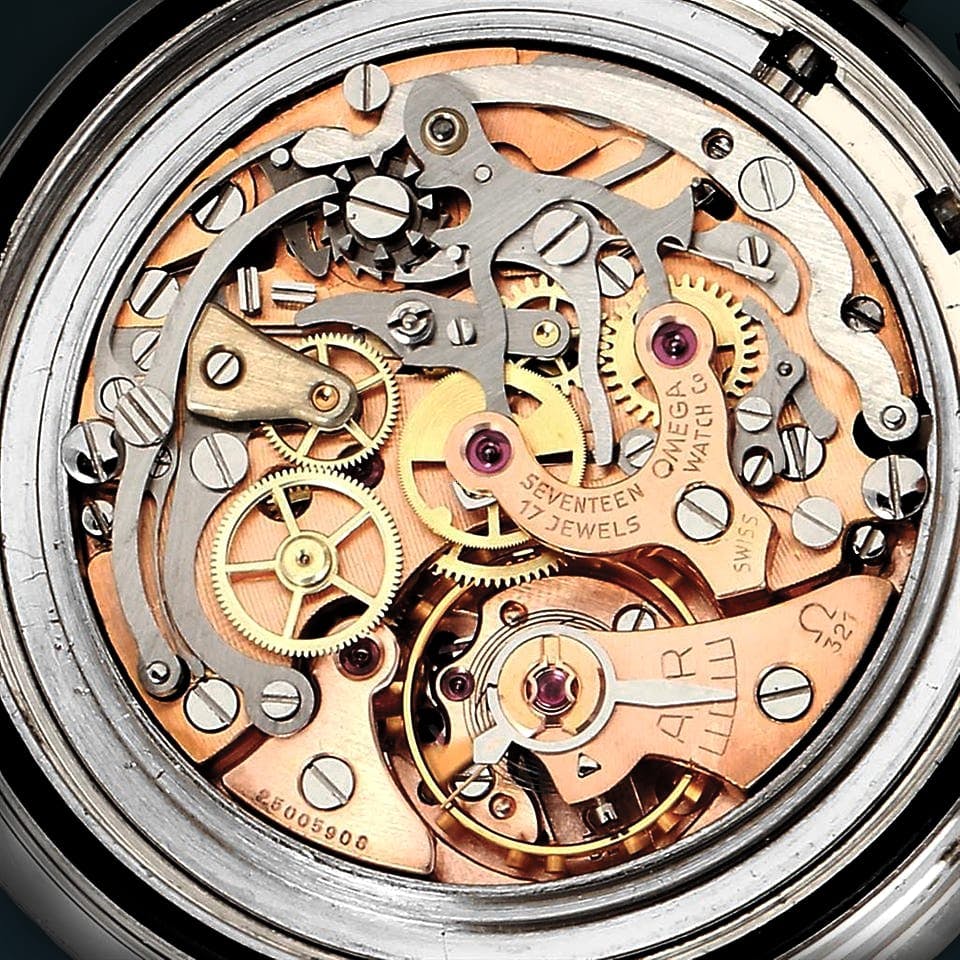 By bringing back the caliber 321, Omega is doing more than just rehashing a discontinued product. They’re paying tribute to a time when watchmaking was not yet a luxury niche but rather a necessity. In an era of practical, optimized, and often short-lived technology, the column-wheel chronograph can be viewed as an anachronism and a symbol of slowing down to enjoy the finer things in life.

Omega: Reaching for the Stars