The Most Extraordinary Rolex Datejust Dials

If you’re a watch enthusiast, you’re probably more than familiar with the Rolex Datejust.

Another possible reason is that it’s readily available, something that can’t be said of many other Rolex models. Rolex watches are more highly coveted than ever, meaning purchasing certain timepieces comes with a years-long watch.

This Genevan brand is also known for its unique fan culture. The world of vintage Rolexes is filled with brand-specific terminology. When searching for a Rolex in online forums, blogs, or on Chrono24, you’re sure to encounter terms like Pepsi, Hulk, Fat Lady, and more. The Rolex community never tires of expanding their creative lexicon.

We’ve already written an article about specific watches and their nicknames. This time, we’re focusing on the nicknames given to the different Rolex Datejust dials. Many collectors consider the dial one of the most important design elements of any timepiece. It often helps them distinguish between individual models. Some variants are particularly rare and, thus, exceptionally popular. If you’re not familiar with Linen, Sigma, and Buckley dials yet, this is the perfect opportunity to learn something new that you can then use to impress your peers in your next watch discussion. 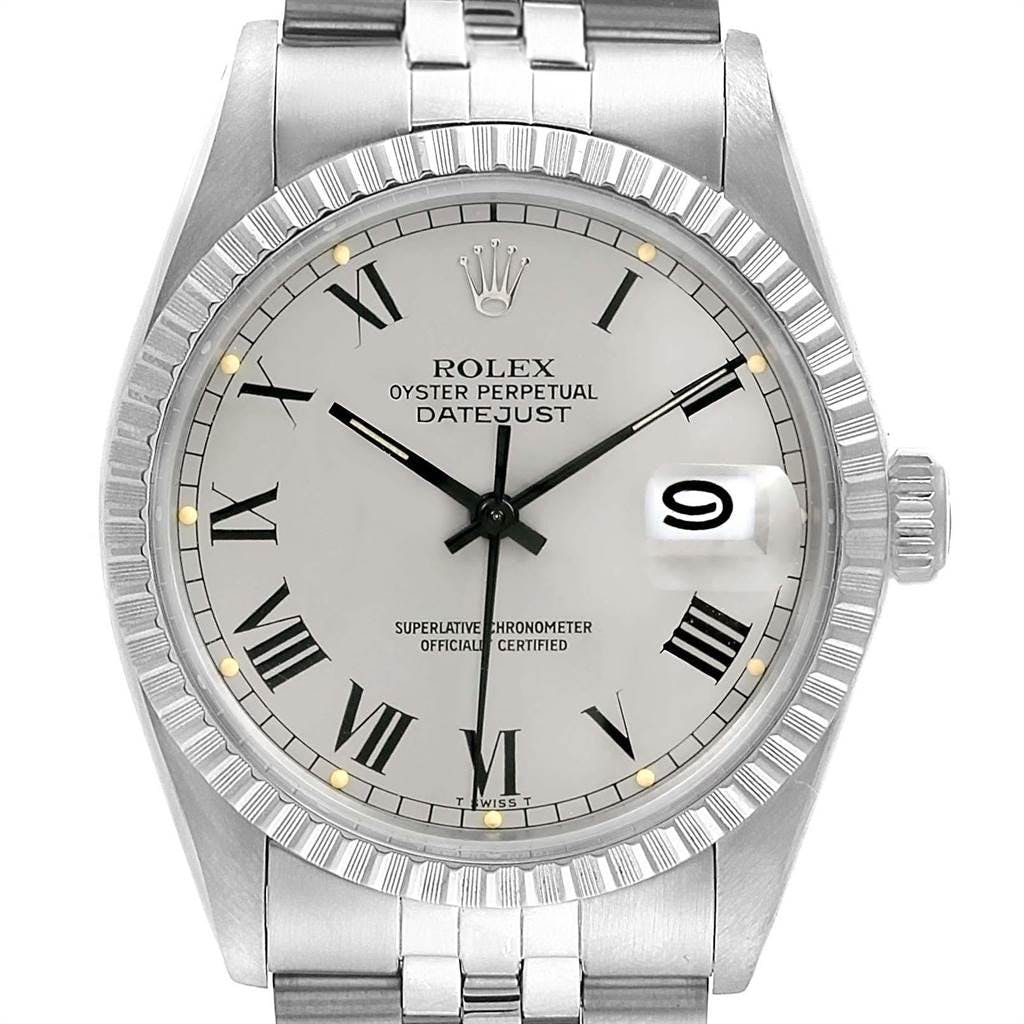 We begin with the so-called “Buckley” dial. This dial is most often ‘s most found on Datejust models from the 70s and 80s. Perhaps its most notable feature is its Roman numerals. There’s some contention as to which references actually exited Rolex’s workshops with the Buckley dial and which were altered after the fact. As usual, Rolex is mum on the subject. However, it’s more than likely that the references 1601, 1603, 16014, and 16030 originally came with the Buckley. These models have either black or white hands and indices. Many prefer the black version thanks to the contrast between its dark elements and the light dial.

In my opinion, the Roman numerals only heighten the Datejust’s already classic and elegant feel. However, the Buckley dial isn’t a Datejust exclusive. Various Day-Date models, such as reference 1803, and some Oysterquartz references can also be found as originals with this dial.

As is often the case, the dial doesn’t get its nickname from Rolex, and the brand doesn’t use it in any official capacity. This is also true of other nicknames, including Pepsi, Batman, etc. So just where does this nickname come from? Rumor has it that the name can be traced back to a prominent watch dealer named John Buckley, who has a shop on New York’s 47th Street. However, how his name came to be associated with the dial remains a mystery. 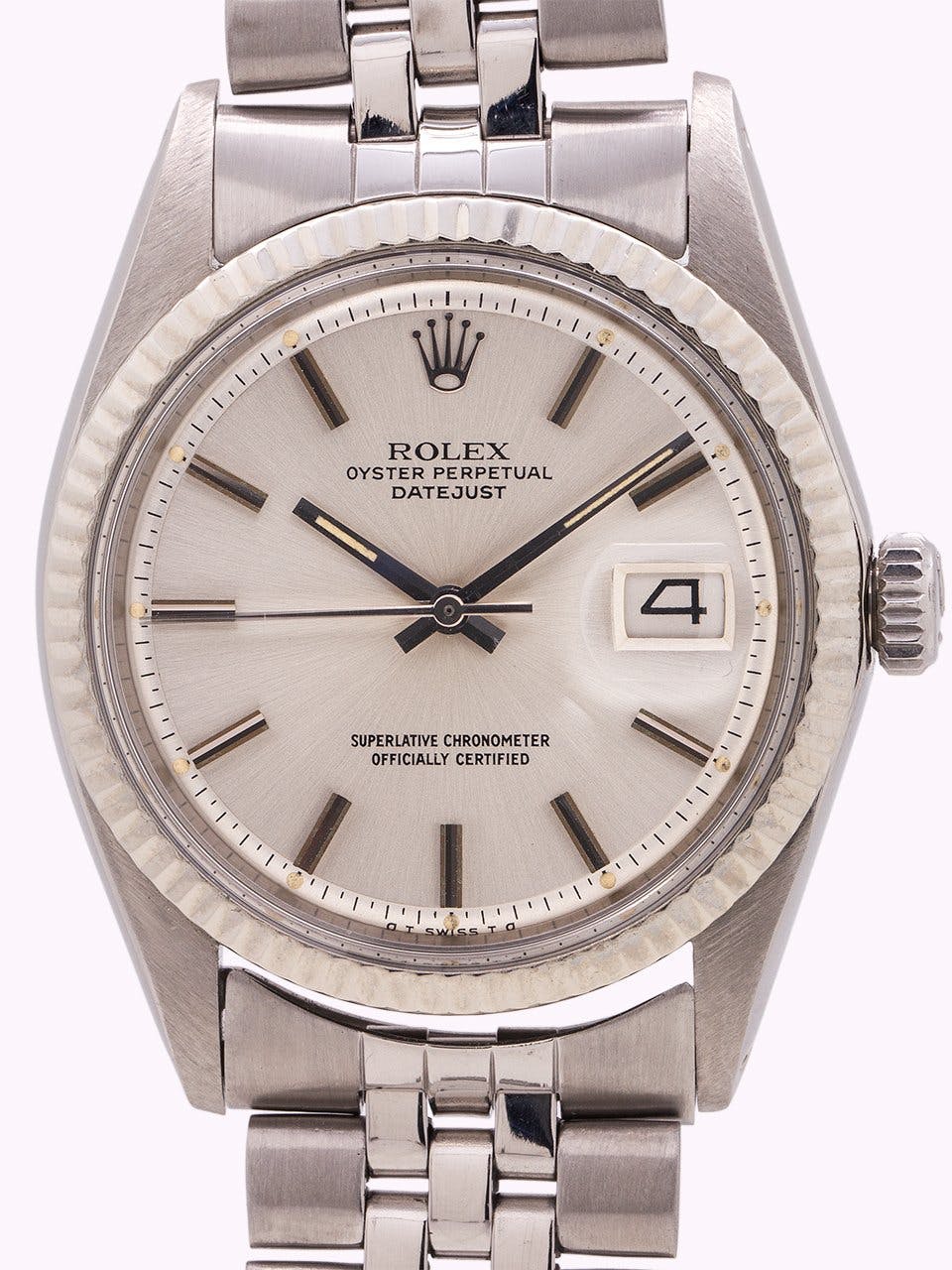 A few months ago, I decided to purchase a vintage Datejust. By then, I’d already had my eye on the references 1601 and 1603 for a quite some time. While looking through different listings, I noticed that prices for these models varied widely. Watches with the “Sigma dial” were generally quite a bit more expensive than other comparable models. So I asked myself: Why? What is a Sigma dial? Unsurprisingly, this dial features the lowercase Greek letter sigma (σ) at 6 o’clock. The letter appears twice, once on either side of “T Swiss T,” a reference to the use of tritium on the indices. Sigma, on the other hand, indicates that the hands and indices are made of gold.

The Sigma dial exclusively appears on Datejust models from the 1970s. This is important for collectors to keep in mind in case they find a watch from another time period advertised with a “Sigma dial.” Due caution is advised in such cases. Rolex has never disclosed why they decided to put this letter on the dials. One theory is that other manufacturers – for example, Omega – had already begun marking dials to indicate that it and/or the hands were made of precious metals. Omega used the sign “OM” for or massif, French for “solid gold.” (Incidentally, this symbol also appears on the case of the latest edition of the gold Speedmaster). However, Rolex is not known for following the trends of other watch brands, which puts this theory in question. A more plausible explanation is that, during the quartz crisis, manufacturers wanted to actively draw attention to the fact that mechanical Swiss watches used valuable precious metals in order to distinguish them from quartz watches.

Sigma dials have also been used by other brands, including Vacheron Constantin and Patek Philippe. By the way, there’s also a version of the much-beloved Daytona with this uncommon dial (reference 6265).

The next Datejust dial, a personal favorite, is the so-called “Linen” dial. This dial has a very beautiful texture that complements the retro look of the Datejust. This dial is found on various models and in a range of colors – from silver and gray to the champagne-colored dial of the two-tone ref. 16013. This model is at its best when light can reflect off its beautiful, “uneven” engraving, making it hard to decide what the best feature of your Datejust is.

There are no current Rolex models with the Linen dial. So once again, we turn to older references, including the 1601, 1603, and 16014. In this case, you don’t have to worry about the inflated prices seen with some of the Sigmas. 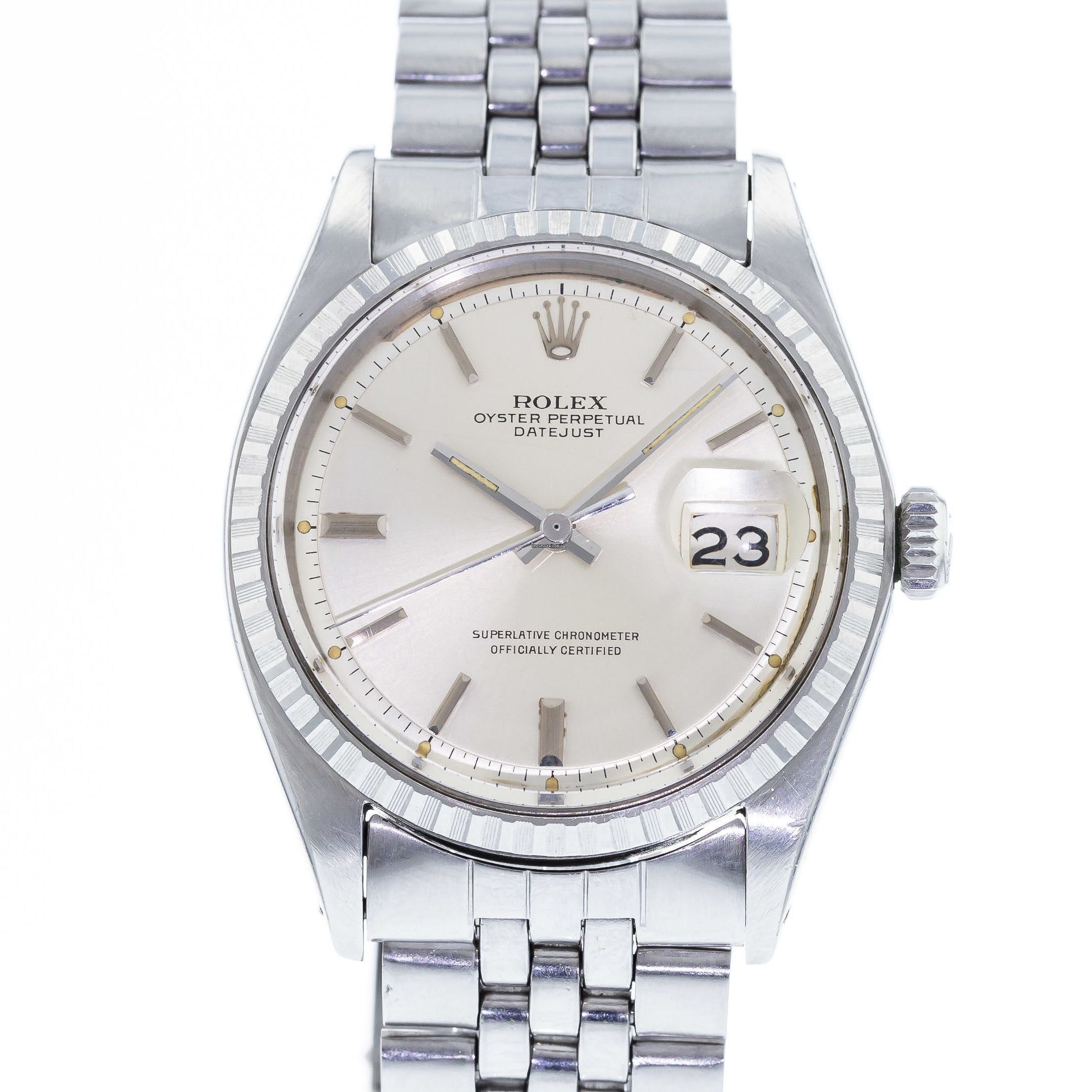 The Pie Pan dial brings us back to my hunt for a reference 1603 because this reference has it. The name derives from the shape of the dial. With an angled outer ring, it resembles an inverted pie pan. This design was popular in the 60s and 70s.

Besides Rolex, Omega also used this dial on many models, such as the Constellation. I personally like the Pie Pan effect because it gives the dial more depth and is pleasing to the eye. In my opinion, the outer ring makes the dial look a bit smaller, while also helping the indices stand out more. Of course, design preferences are a strictly subjective matter. However, if you’re looking for a vintage Datejust and appreciate subtle design elements, you can’t go wrong with a Pie Pan dial. 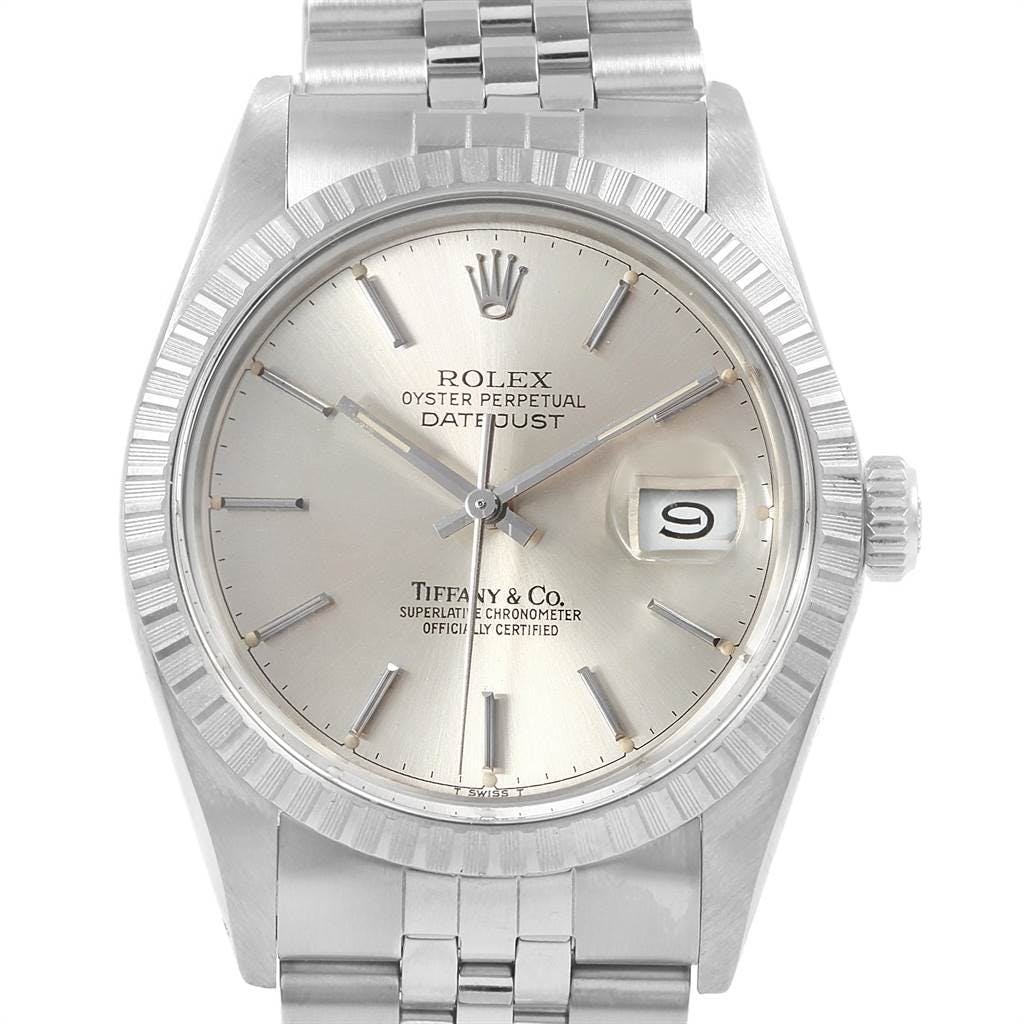 These days, cooperations between luxury brands like Rimowa and Supreme or Berluti and Ferrari are all the rage. The resulting products just seem to fly off the shelf. When two trendy brands meeting for a single limited production run seems to be a recipe for success. This holds true for both the Rolex COMEX Submariner and the Tiffany & Co. Datejust, even though these partnerships ended long ago. Once again, the Datejust 1603 serves as a prime example. So how was the popular retailer Tiffany & Co. able to leave its mark on the Datejust dial?

Though it seems impossible today, Rolex didn’t exert much control over co-branding in the 1960s. While Tiffany & Co. sold more than just Rolex, the Genevan brand was extremely popular. In order to let everyone in the Upper East Side and on Wall Street know where Rolex was being sold, Tiffany & Co. began stamping various Rolex models (including the Submariner and GMT-Master) with their own logo, in addition to the Rolex crown. While the first watches were stamped by hand on location in New York, Rolex later took over the job themselves, delivering co-branded models directly from Geneva. In the late 90s, Rolex decided to no longer allow other brands to appear on their dials, which did not please Tiffany & Co. and eventually led to a rift between the two companies.

I advise particular caution when buying a Rolex with a Tiffany dial because the process of stamping the Tiffany logo on Rolex dials was very poorly regulated. The resulting dials feature major inconsistencies in terms of font, placement, and color, depending on where they were produced. For many collectors, the Tiffany dial is something very special. It’s an artifact of an exciting era in Rolex’s history, during which the company hade yet to gain tight control over its products.

For many collectors, the appeal of Rolex is based on the “parallel world” that has developed around the brand. It’s a world filled with countless stories, peculiarities, and occasionally also obscure names for models and individual watch components. Some of these are supported by facts and historical evidence, while others seem to come out of thin air and may simply be used to make the watch seem more special and rarer than it really is. A bit of research (using a variety of sources) is, therefore, advised in order to determine how “exceptional” an advertised watch actually is. At the end of the day, these are rather small details, and I personally find the stories behind them very entertaining. Once you’ve discovered them for yourself, you can find enjoyment in discerning the Pie Pan dial from other Datejust models, even after looking at these subtle differences 100 times. If you’re anything like me, that is.

Rolex: A Brand of Superlatives

Can fashion brands keep up with traditional watchmaking?

Hi, I'm Pascal. After spending many hours searching for my first luxury watch on Chrono24, I ended up visiting their "Legal details" page and saw their headquarters …