What is a tourbillon and how does it work?

The tourbillon is small, delicate, and always on the move. So how does it work and who invented it? As in the other articles in this series, we’ll be giving you a simple, uncomplicated answer to these questions.

What is a tourbillon?

Translated into English, the French word “tourbillon” means “whirlwind.” However, the tourbillon has very little in common with a storm. It’s actually a device found in some mechanical watches that is meant to improve accuracy. By constantly changing its position, it eliminates any gravity-related deviations. However, strictly speaking, it is not a true complication since it does not add any functionality to the watch. Nevertheless, it is still an indicator of watchmaking of the highest quality. Very few manufacturers are even able to produce this complex watchmaking masterpiece. How does a tourbillon work?

At its most basic level, a tourbillon is a rotating cage that contains the entire balance with its spring, escape wheel, and lever. This cage is usually connected to and powered by the fourth wheel, which is responsible for displaying the seconds on a small seconds dial. Both the fourth wheel and the tourbillon make one full rotation per minute. This rotation offsets any gravity-related deviations and guarantees the highest possible level of accuracy.

The History of the Tourbillon

In the late 18th century, the pocket watch was the timekeeping instrument of choice. Wristwatches were unthinkable at that time and wouldn’t begin to make waves until the 20th century. Until then, the pocket watch would reign supreme. They were most often carried by men in their vest pockets in a vertical position. However, this position had a negative effect on a watch’s accuracy due to gravity. It was a problem in desperate need of a solution.

Abraham Louis Breguet tackled this issue head-on and developed the tourbillon in 1795. Six years later, he had his idea patented. Breguet is considered a watchmaking genius due to his many inventions. What’s more, he also supplied watches to numerous royal families. His customers included Tsar Nicholas I of Russia, Queen Marie-Antoinette of France, and Caroline Murat, the Queen of Naples and younger sister of Napoleon Bonaparte.

Since its invention, many watchmakers and manufacturers have continued to develop and improve upon the tourbillon. One prominent example is the so-called “flying tourbillon” created by Alfred Helwig in 1920. A flying tourbillon lacks an upper bridge on the cage and instead is only supported from the bottom.

The gyro tourbillon from Jaeger-LeCoultre is another, much newer evolution of the tourbillon. The Le Sentier-based manufacturer presented their first wristwatch with a gyro tourbillon in 2004. Since then, there have been two more generations of this mechanism. Unlike a normal tourbillon, the case of a gyro tourbillon rotates in three dimensions. This combats gravity-related deviations in any position, whether vertical, horizontal, or diagonal.

Special Watches with a Tourbillon

Anyone on the market for a tourbillon watch is spoiled for choice. Almost every notable manufacturer crafts their own timepieces with this small whirlwind, including A. Lange & Söhne, Blancpain, Breguet, and TAG Heuer. 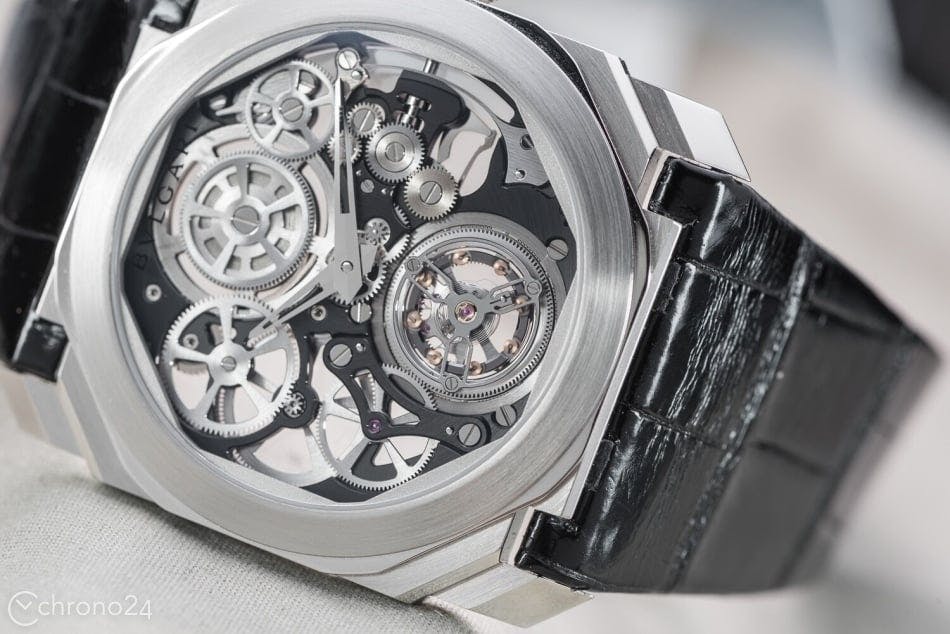 The TAG Heuer Carrera ‘Tête de Vipère’ Chronograph Tourbillon Chronometer is a much weightier timepiece. That said, this 45-mm sports watch is the world’s most affordable chronograph with a tourbillon. Despite having a limited run of only 155 watches, it still costs less than 23,000 USD. Furthermore, the manufacturer has the precision of these timepieces certified by the Observatoire de Besançon (Besançon Astronomical Observatory) in France. Since 2006, the observatory has only given the distinction of “Tête de Vipère” (“Viper’s Head”) to 500 watches. 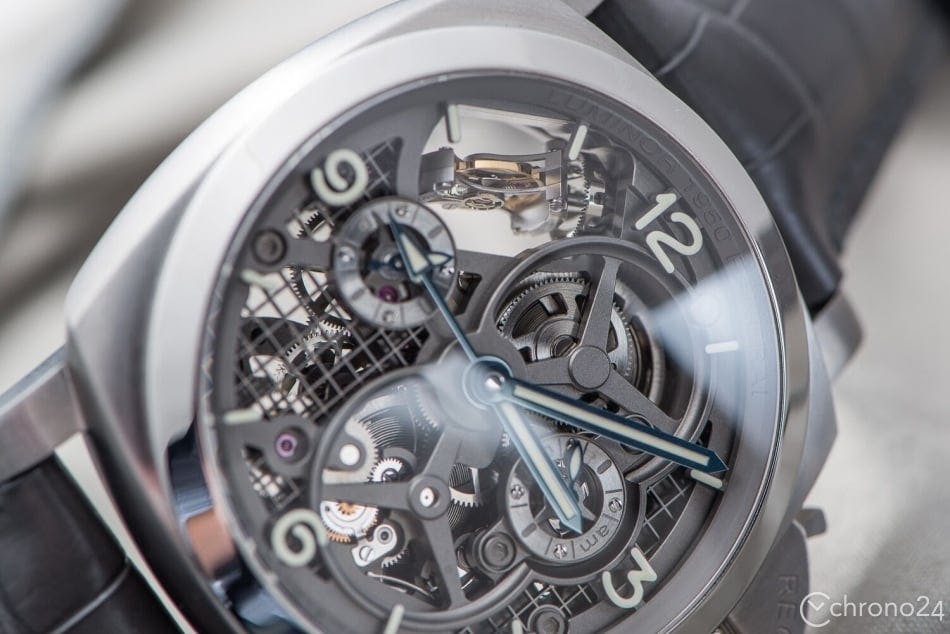 The Panerai Lo Scienziato Luminor 1950 Tourbillon GMT Titanio is yet another interesting tourbillon watch and is dedicated to Italian scientist Galileo Galilei. Unlike most tourbillon watches, its balance turns on a horizontal axis rather than a vertical one. Three barrels lend this timepiece its impressive 6-day power reserve. A power reserve display sits on the back of the caliber P.2005. Additionally, this Panerai watch has a day/night indicator and an extra central hour hand that displays the time in another time zone. Since it’s made of titanium, the 47-mm case is remarkably light. Only 150 copies of this special edition timepiece exist. 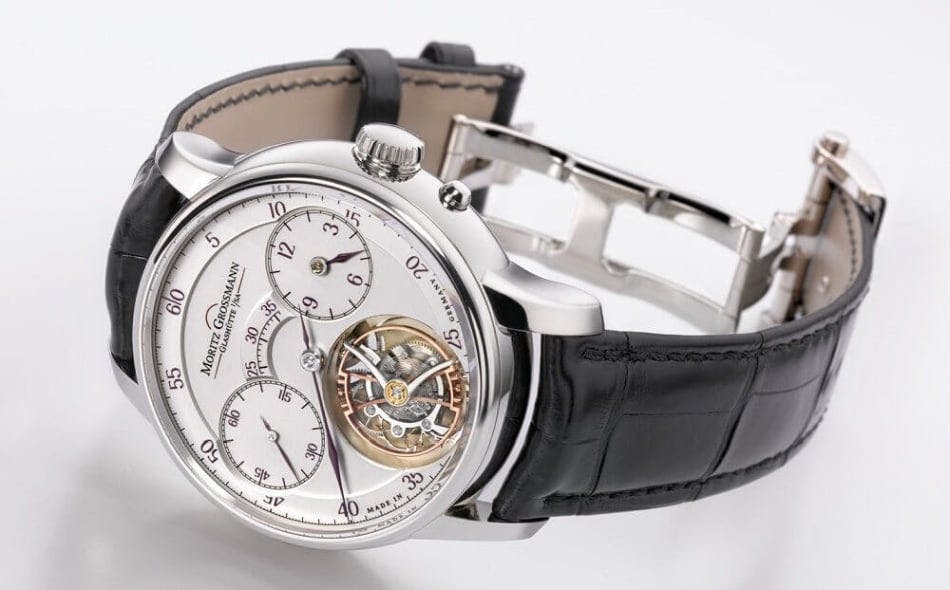 The Moritz Grossmann Benu Tourbillon takes the idea of a hairy situation to a new level: Its stop-seconds mechanism, which allows the wearer to set the time to the exact second, features literal human hair. The small brush of hair gently stops the balance wheel, thus halting the entire movement. The timepiece’s 16-mm balance cage is also unique, as it requires three minutes to make one full rotation. The white gold edition with a black dial is limited to a run of 10 pieces, making it exceptionally rare.

Is the tourbillon still relevant?

Since the tourbillon was originally intended for pocket watches, the obvious question is whether or not it still makes sense in today’s wristwatches. Hardly anybody carries their watch vertically in a pocket anymore, and vests are no longer a part of most men’s daily outfits.

In fact, the constant motion of the wrist means gravity has a much different effect on wristwatches. This is why Jaeger-LeCoultre’s gyro tourbillon seems to be the best solution for achieving maximum accuracy.

However, other manufacturers have high-precision watches in their catalogs without the need of a tourbillon. For example, movements from Rolex, Omega, and Grand Seiko are extremely accurate thanks to their perfect finishes, sophisticated technology, and modern materials.

All of that is to say that a tourbillon is not a necessary feature of an accurate watch. However, seeing this small “whirlwind” at work is still a sight to behold. Therefore, the tourbillon is and will remain a masterpiece of haute horlogerie.

Read the other articles in this series:

What’s the difference between a quartz watch and a mechanical watch?