The Top 3 Watchmaking Achievements of the 21st Century

The history of watchmaking is as impressive as it is diverse. From ancient water clocks and the construction of the first mechanical clocks to the development of precision marine chronometers and the creation of the automatic wristwatch, the industry is synonymous with innovation. Each of these historic developments was driven by a need for greater accuracy in timekeeping.

Watchmaking technology is completely different today. When it comes to precision, even the cheapest quartz timepiece will easily surpass the finest chronometer wristwatch. Improved precision is, therefore, hardly a relevant topic considering mechanical watches are primarily seen as jewelry or status symbols, right? Did the centuries-long history of mechanical innovation end with the advent of the automatic chronograph, which appeared around the same time as the quartz caliber?

Luckily, we can answer both of those questions with a resounding “no.” If it’s not precision we’re after, however, which recent developments warrant some extra attention? We have selected three major achievements in movement technology, materials, and design that we think have changed watchmaking as we know it.

A Movement Revolution: The Co-Axial Escapement

Chances are, if you’re wearing a mechanical watch, it’s fitted with a Swiss anchor escapement. This mechanism, with its characteristic ticking sound, ensures the movement’s regularity and precision. Most watch enthusiasts are familiar with the escapement’s basic construction: There’s a balance with a hairspring, an anchor, and an escape wheel. It wasn’t until some 250 years after its invention that George Daniels called the anchor escapement’s design into question. Daniels’ overall impact on modern watchmaking is undeniable; however, we’d like to concentrate on his perhaps greatest achievement: the co-axial escapement. 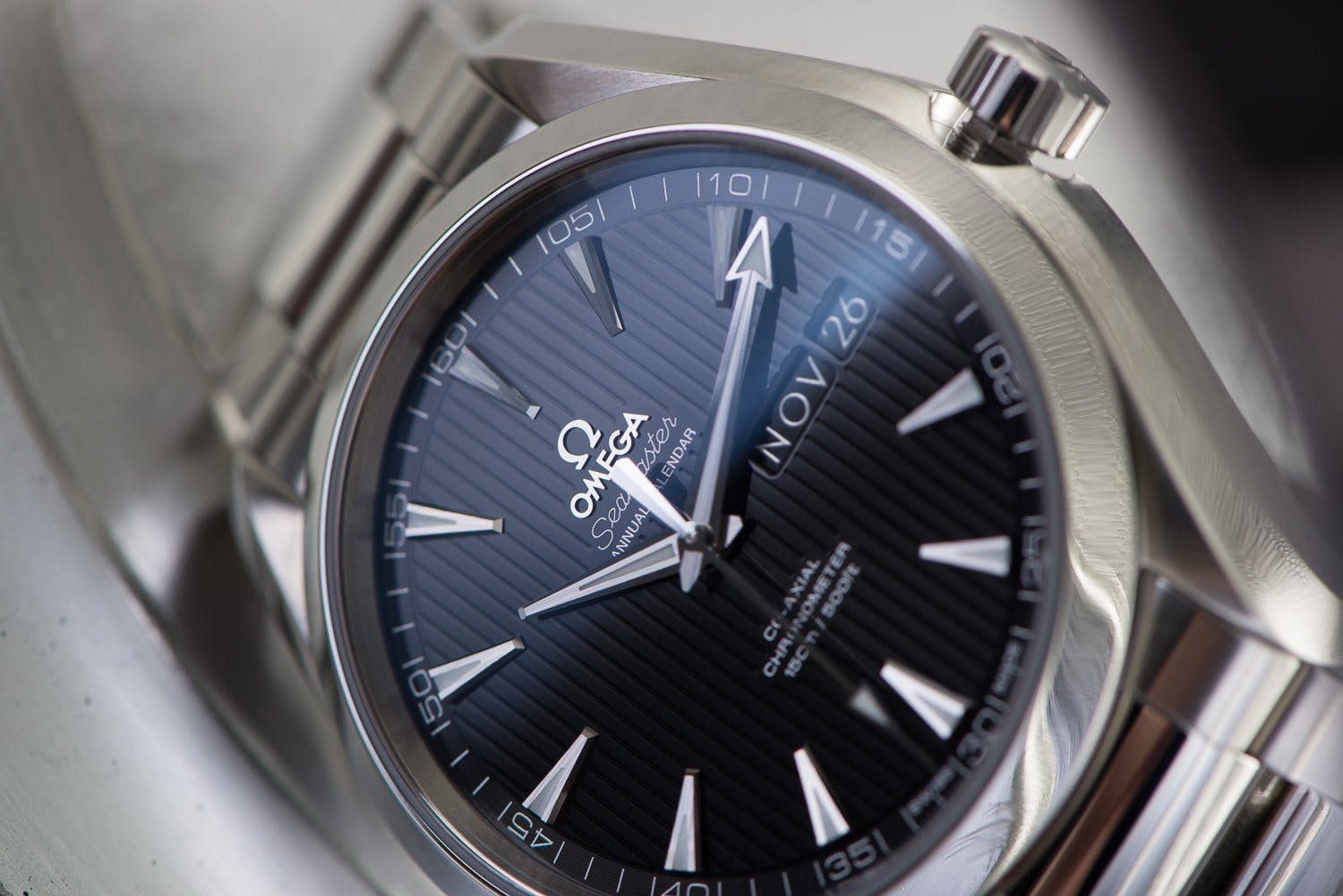 Omega watch with a co-axial escapement

The anchor escapement has one major drawback: friction. Although it’s considered a so-called “free escapement,” meaning the balance wheel can more or less swing freely without constant contact with the movement, the faces of the escape wheel still rub against the anchor’s pallets; and where there’s friction, there must be lubrication. Unfortunately, lubrication is subject to wear and aging, which means the functionality of the watch will change over time and require upkeep.

Breguet is quoted as saying, “Give me the perfect oil, and I will give you the perfect watch.” George Daniels’ approach was even more radical: If you can minimize friction in the escapement to the point that no lubrication is needed, then you’ve practically created a maintenance-free watch that can even outperform a quartz watch in the long run!

Chronometer escapements were already known to have low levels of friction. However, they were sensitive to jolts and had to be opened for resetting if they stopped working, making them an impractical option for wristwatches and pocket watches. Thus, Daniels took it upon himself to develop a completely new type of escapement that featured two escape wheels stacked on a shaft, resulting in the co-axial escapement. The new design separated stopping the gear train and sending the impulse to the balance wheel. The impulse now occurred vertically, which eliminated the friction between the escape wheel and the ruby pallets. 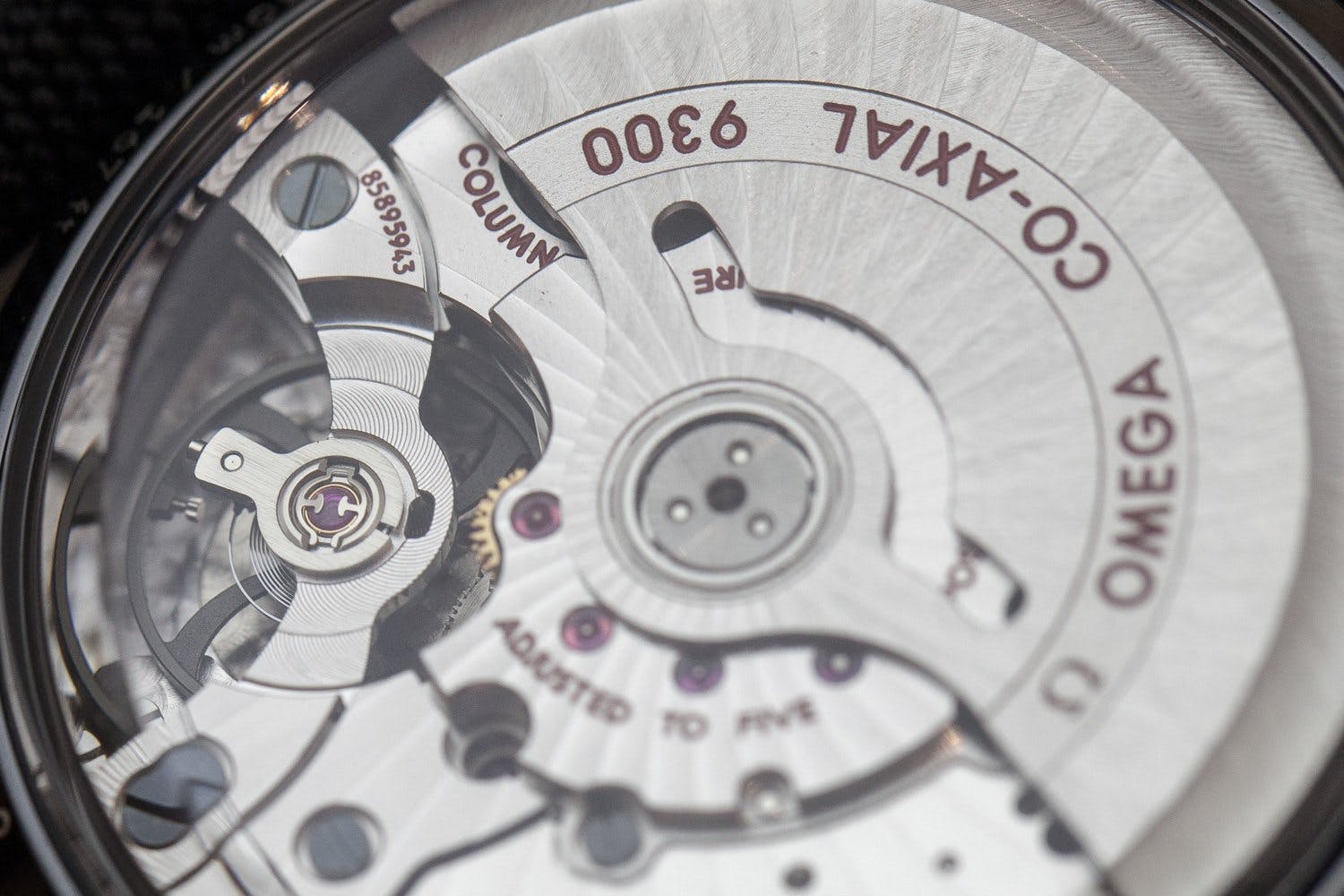 Despite his efforts, adapting this innovation for use in timepieces and putting it into series production was, ultimately, the responsibility of the watch industry. In the late 1970s, Daniels began pitching his invention to the major Swiss manufacturers. Yet, as he reported in an interview, it would take another 20 years of him “bombarding” the industry before his goal was realized. Patek Philippe, among others, had attempted to use the escapement with varying levels of enthusiasm over the years but each eventually gave up prior to series production.

As we all know, the co-axial escapement is now most closely associated with Omega. The escapement finally made its series debut in 1999 as part of the DeVille collection. Over the last 20 years, its use has been expanded across the brand’s catalog, finding its way into most collections, first in modified ETA calibers and now as part of many in-house movements. 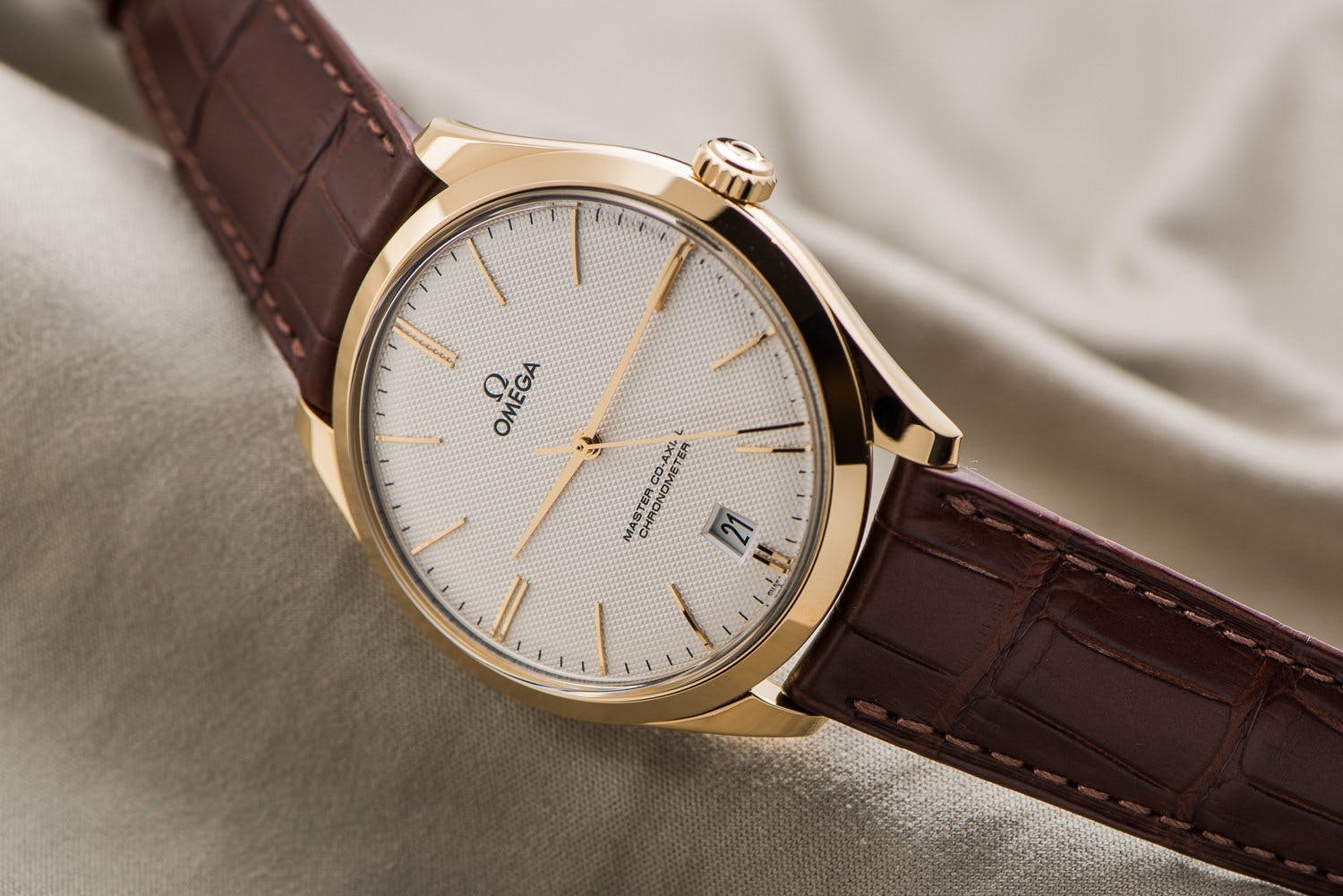 So, what about the age-old question of lubrication? Does a watch with a co-axial escapement really never require maintenance? That’s not the case with Omega movements (yet), but you also have to appreciate the enormity of adapting Daniels’ invention for mass production. Omega persevered where others gave up, challenging the status quo with more than just empty words.

Nowadays, watch enthusiasts expect manufacturers to boast high levels of vertical integration. In light of this, Omega’s decision to go forward with co-axial production was a wise move and, considering the brand’s current popularity, a successful one, too.

It’s not a huge jump to the next major achievement because Omega’s current co-axial escapement makes use of this revolutionary material: Yes, we’re talking about silicon. While the material is more commonly associated with microchips, it’s growing in popularity in the world of traditional mechanical timepieces. So, what makes silicon attractive to watch manufacturers? And why is it popular with some brands but boycotted by others?

In order to answer these questions, you have to look at not only the material’s inherent qualities but also its suitability for production.

Silicon is highly elastic, anti-magnetic, largely impervious to temperature fluctuations, and requires little to no lubrication. Keeping these qualities in mind, it seems to be an ideal choice for hairsprings.

It wasn’t until 2001, however, that silicon finally appeared in an escapement. Ulysse Nardin used the high-tech material in their first iteration of the Freak. 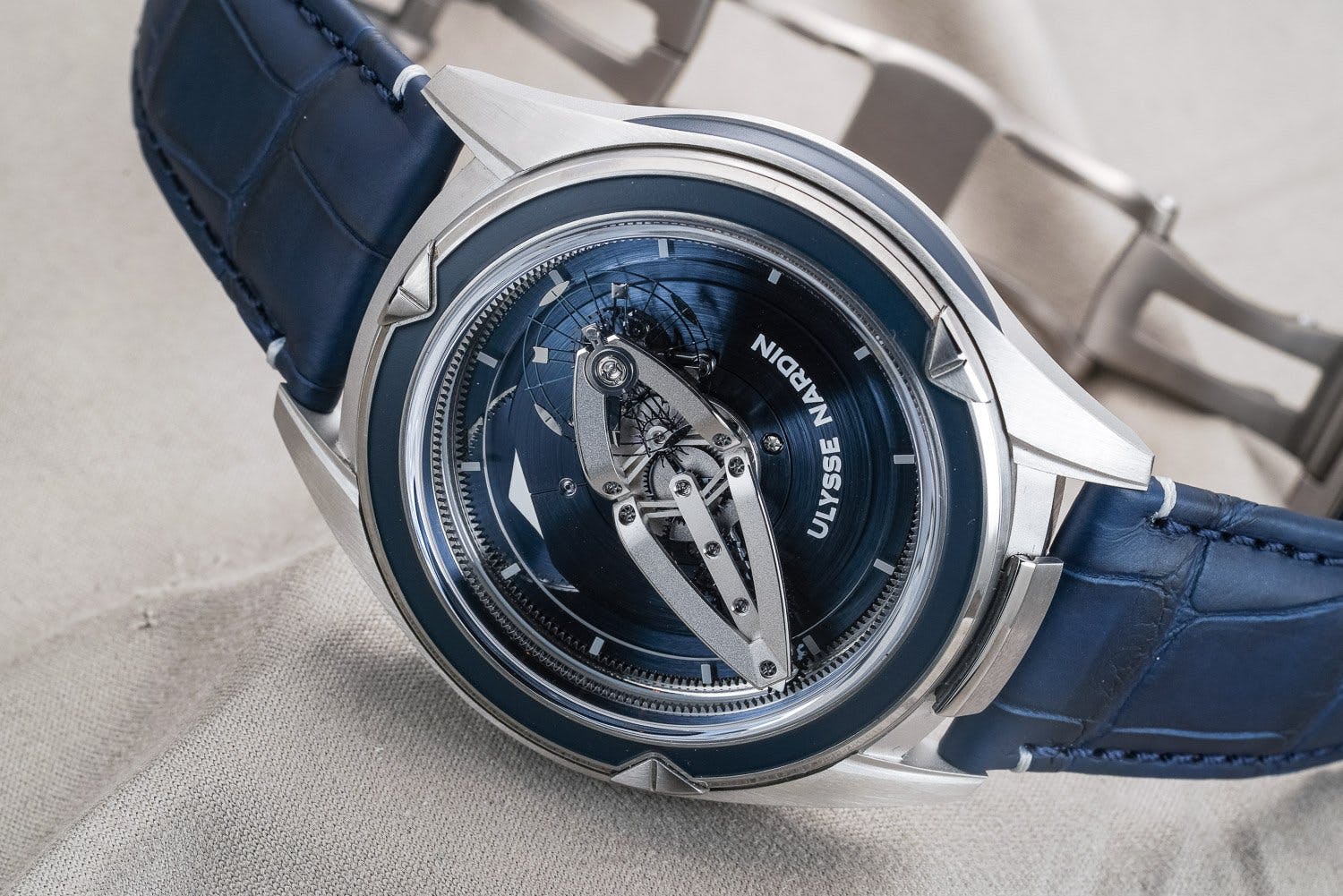 The triumph of silicon in watchmaking is closely linked to developments in microsystem technologies and production techniques, including a process called deep reactive ion etching (DRIE).

This high-tech process allows manufacturers to produce a number of different components from thin silicon discs. A single machine can produce numerous complex pieces, such as an escape wheel. In fact, it can even produce several at once. What’s more, the surface quality is of such a high standard that the parts are usable straight off the machine, no finishing required.

Silicon is no longer relegated to the world of high-tech concept watches, however. It’s also found its way into entry-level mechanical timepieces. Most watches that claim to have silicon parts are outfitted with a silicon hairspring, one example being the Tissot Seastar 1000 Powermatic 80. This watch has prices in the three-figure range, proving that silicon has now spread throughout the industry ranks. 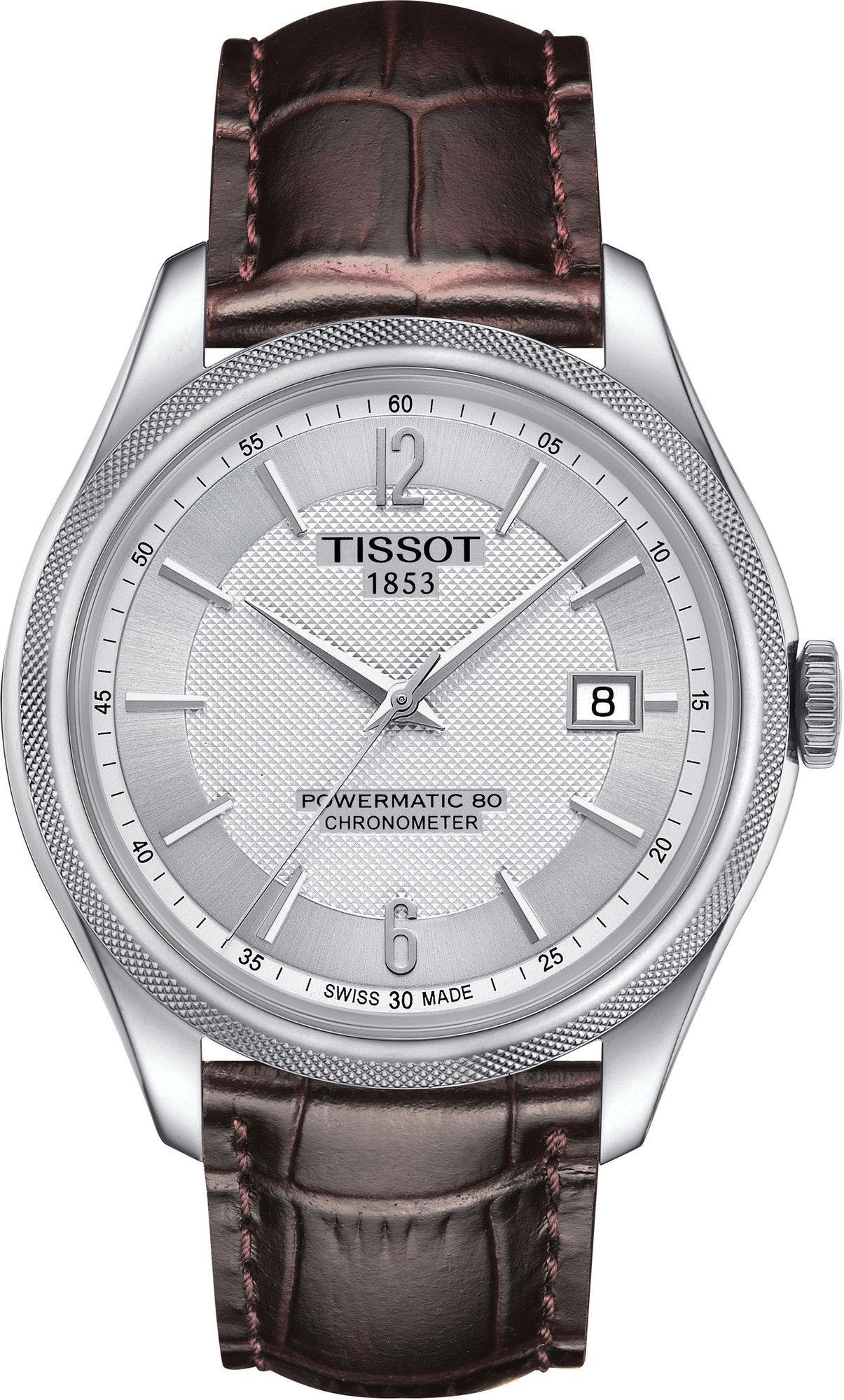 Above we wrote that silicon is “largely” impervious to fluctuations in temperature. However, “largely” impervious doesn’t quite cut it for a balance spring. An unconventional meeting of minds tackled this problem at the start of the 21st century. The Swiss Center for Electronics and Microtechnology (CSEM) teamed up with the Swatch Group, Rolex, and Patek Philippe and discovered that a layer of silicon oxide was sufficient to keep components unaffected by all temperatures. The developers soon patented their discovery. The importance of this technology was proven when Baume & Mercier, owned by Richemont, released a Baumatic model featuring a silicon balance spring. Conflict soon ensued, resulting in newer Baumatic models being released without a silicon balance spring.

It should be noted, however, that intellectual property isn’t the only controversial aspect surrounding the use of high-tech materials like silicon in watchmaking. Manufacturer F.P. Journe, for example, refuses to use silicon parts because they cannot be replaced or repaired by traditional watchmakers.

Regardless of your personal viewpoint, silicon has firmly established itself in modern watchmaking. It contributes to improved accuracy and, despite the mixed feelings, it certainly won’t be disappearing anytime soon.

It’s never easy to highlight a single brand, designer, or model, but it’s even harder when you’re looking at watch designs in general. Which timepieces come to mind when you think of iconic design? Once you have one in mind, think about when that watch was made. Chances are, you’re envisioning the Audemars Piguet Royal Oak, Jaeger LeCoultre Reverso, or Omega Speedmaster. This should make one thing clear: No watch is born an icon. Legendary designs are usually only recognized as such in retrospect.

I wouldn’t dare pick a single model as the outstanding design achievement of the 21st century. However, if I had to pick a designer, there are few who could compete with Swiss watch designer Eric Giroud.

Giroud initially worked as an architect before finding his way to industrial and furniture design, which ultimately led to watch design. But what is it that makes Eric Giroud THE watch designer of the modern era?

To start, he has an impressive résumé. Giroud has worked with classic manufacturers like Tissot and Mido, long-established brands like Vacheron Constantin, and exclusive names like Harry Winston and MB&F.

Giroud was behind the rerelease of Tissot’s PRS 516, a timepiece with roots in the 1960s. While it may not be the technical masterpiece of the century, it is certainly an affordable modern classic that has found its way onto many wrists.

Giroud has been involved with Max Büsser’s high-end brand, MB&F (short for Max Büsser and friends), from the very start. The brand was founded in 2005 and has since earned its place as a pioneer in the world of haute horlogerie thanks to its unconventional designs. Giroud has had a hand in most projects, including the Legacy Machine, which is the most classic MB&F design to date and one that many have already deemed an icon. 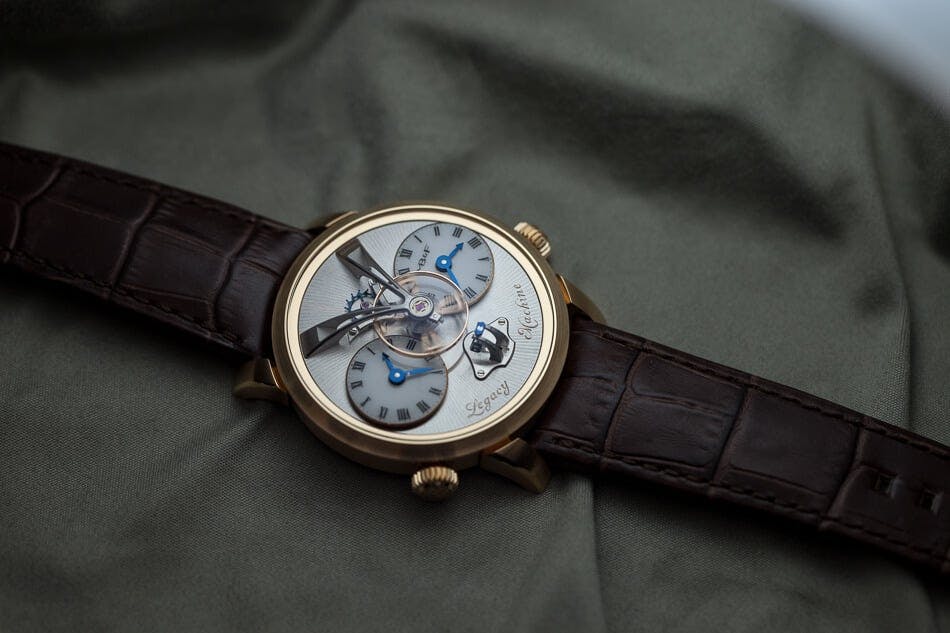 Giroud’s designs are as varied as the brands that commission them. His newest creation, for example, is a beautifully redesigned and streamlined version of the Louis Erard Regulator. At the other end of the spectrum is the Harry Winston Opus IX from the prestigious Opus line, which features retrograde displays with revolving belts for the hours and minutes.

All of that said, very few watch designers, who have been active in the last few decades, have had any name recognition at all; at least nothing to rival Gérald Génta or Jorg Hysek.

No End in Sight

If you had any doubts about the level of ongoing innovation in the watch industry, our small selection of developments has hopefully offered some food for thought. We consciously limited ourselves to just three highlights, but we know there are achievements well above and beyond this list. What do you consider the top watchmaking achievements of the 21st century? Share your ideas in the comments on Facebook or Instagram.

More Than Just Nostalgia: The Comeback of Omega’s Column-Wheel Calibre 321